Leanor Ortega Till is perhaps best known as the saxophonist for former Christian ska band Five Iron Frenzy (1995-2003). For eight years, Leanor (or "Jeff the Girl" to the Five Iron fan base) ministered to hundreds of thousands of people through music, personal conversations, and poetry.

These days, Leanor is the Art and Women's Pastor at Scum of the Earth Church in Denver, Colorado. With a heart to serve her fellow artists, she continues to minister through music, the written word, and mentoring relationships. 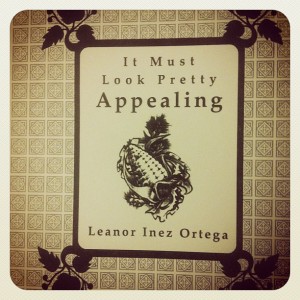 In 2003, she published a book of poetry entitled It Must Look Pretty Appealing. The Phantom Tollbooth recently conversed with Till via e-mail to discuss her poetry, art and faith.

Tollbooth: When did you start writing poetry?

Till: The first poem I wrote was a haiku I had to write in 4th grade. I still remember it. Later in high school, I was one of the writers for the school newspaper and to fill up space I started writing poems. "In a Gazer's Eyes" was written for the margin of the newspaper.

Tollbooth: What does your writing process look like? Does the idea for a poem come in a flash or is it a struggle of revision after revision?

Till: Honestly, once I write a poem not much changes about it. The poems in It Must Look Pretty Appealing were read by my friend Chris Deulen as well as by Ed Ward, who published it. They gave me their well-intended suggestions but, for the most part, I chose to keep the original words. The visual layout of the poems was very much suggested by Ed Ward however, and since he has had decades of publishing poetry I took a lot of his advice in that area.

Tollbooth: What part do you think God plays in the act of creative inspiration? Is God the great Muse who gives all artists their ideas (Christian or otherwise)? Or does He gift them with talents with which they work out their own art?

Till: For me, God is always at work. He is always the Muse, even when the creative expression is anger, pain, loneliness or fear. Creative expression is the feeble attempt at wrapping our minds around the lovely, the good, the frustrating and the painful. I don't put too much stock in talent. I create because I enjoy it and because it helps me to examine my feelings and thoughts in a new light.

Tollbooth: What's the inspiration behind the title, It Must Look Pretty Appealing?

Till: It is a Bad Religion line that I love. I published this book at the height of Five Iron's musical career. Lots of people wanted to get to know me, or at least wanted to know what they thought they knew of me. I was very much on a pedestal and so the title was a way of saying, I am really no different than you...read these pitiful, jr. high-like, crybaby poems and learn that for yourself. I have the similar thoughts and yearnings of most young women.

Tollbooth: This book is a thing of beauty. The sterling sweetness of it is especially bold when the poems are read out loud. I loved the spoken sound of your word choice. How did poetry effect your expression as a contributing artist in Five Iron Frenzy?

Till: Thanks for saying this! These poems really are meant to be read out-loud. I am a very rhythmic thinker, ok...call me a rapper, I guess. I choose words based on their cadence and sound to the ear. In the beginning of FIF [Five Iron Frenzy], I submitted one song that was a poem of mine. I am so not proud of that song. It's called "Faking Life" and it is pretty cheesy. But no one knew who we were and so I never imagined anyone would really hear it.

Later I contributed more and wrote the lyrics to many songs. Off the top of my head I wrote: "All That Is Good," "Something like Laughter," "Me Oh My," "Car," and parts of "Giants" and "Cannonball." I love, love, love writing lyrics, those I tweak and tweak and those I pray over for a long time. There is a ton of responsibility when it comes to writing words many people will read and re-read.

Tollbooth: There's a lot of oceanic metaphor in the book and you live in rather land-locked Colorado. What is it about the sea that makes it such a compelling image for the ideas you want to convey in this book?

Till: I never noticed that, to be honest. I guess I have been drawn to the ocean and the vastness of it is very much Godlike. Also the waves smacking me in the face again and again seem to be a theme of the Christian life.

Tollbooth: Your poem "For Pablo Neruda" was the inspiration for the Five Iron Frenzy song "Me Oh My." I don't think many of the band's fans would see the connection between that song and the writings of a devoted Chilean communist who won the Nobel Prize. How did you become familiar with his work? How has he influenced you and your formation as an artist?

Till: I love Neruda. I speak and read Spanish and so having copies of his poetry books have been a wonderful way to see the nuances in the languages. I don't really know much about him personally but I love how he takes simple everyday items into consideration in his poems and creates a landscape around them. He is very, very sensual and if my audience were different I suppose I might try my hand at more sensual poetry. Maybe my next collection...

Tollbooth: I was so happy to see that the lyrics from "All That is Good" were included in this book. How did this song come about? What was the writing process like for you?

Till: "All That Is Good" is an extremely personal song for me. I wrote this song about Scott [Scott Kerr, Five Iron Frenzy lead guitarist] when he was going through his changes in thoughts on faith. (Sorry if this is new news to someone. I don't mean to sound light about this but he talks about it in our DVD, so it is public knowledge now.)

Again, we were on people's spiritual pedestals. The saddest thing is that when we are put up there, we have so much further to fall. Working out one's faith is hard enough let along having hundreds of people watching you. The other theme of that song is, "use your mind to use your soul."

So often, as Christians, we hear horror stories of the kid who asked too many difficult questions in youth group and was made to feel like an inconvenience and burden. Our doubts are not to be feared. We should be able to authentically live them out. That reasoning is why Scum of the Earth's mission statement includes the line,

"We aim to be a church that asks questions while seeking the truth."

Tollbooth: You're now on staff at Scum of the Earth Church in Denver, Colorado. I had the pleasure of reading that church's story in Mike Sares' book, Pure Scum: the Left Out, the Right-Brained, and the Grace of God. It's clear your church has a heart for artists, a group that has often been misunderstood or ignored by the Church at large. What role do you think the arts can and should play in the local church?

Till: Huge question! I would love to see the arts used more in the church because it places the right value on the artist! For me, it is not so much about the art created rather the soul that is creating. I recently gave a sermon on just that subject (or a similar thought) entitled "The Calling of the Artist." It is up on our podcast now (at www.scumoftheearth.net). I am happy to say that I will again be curating for our Scum gallery. I also oversee gallery outings and lead occasional studies on art related topics.

Tollbooth: In "La Punk- thoughts on symbolism," you write that you "will not wear a cross or tattoo Hebrew words, images of doves, thorns or religious icons on your body." Instead, you focus on a faith that is "internalized, solidified, and celebrated by seemingly monotonous daily graces." Do you think there is a necessary antithesis between iconography, religious tattoos, cross jewelry and sincere, internal faith?

Till: No. Who's to say what a person's internal faith is based on his/her outside appearance?

Tollbooth: How have you seen poetry, art, music, prose, drama, dance, etc. build up the body at Scum of the Earth? Do you think evangelical churches should adopt the use of icons, liturgies, and ancient creeds for their aesthetic (as well as theological) benefits?

Till: Art can only reach people in as much as they create it and they will only feel safe, loved and encouraged to create it if their leadership values it. Sadly, the message most churches give to artists is that their gifts are only useful during holidays and only if they play it safe. Safe for artists does not usually exist.

We must be like Moses when he praised Bezalel (in Exodus) and asked for funding and contributions of the greatest riches on his behalf. Moses understood that God had a vision and that the artist needed an advocate. I am not saying Scum does a great job at this. I pray and hope to learn more of what this means for us as a church and as a community of creative followers of Christ. As to other churches, again, I can't assume that what works for Scum would work for another church. Our community and focus is very specific in some ways, for the Left-Out and Right-Brained. Not every church is aiming to serve and send out that type of person.

Tollbooth: I know you must get this a lot, but what do you think the likelihood is of Five Iron Frenzy coming back for a reunion tour? Is there any hope for the faithful fans?

Till: There is always hope. Never lose faith in us and we would be blessed to have your prayers.

To order your copy of her book It Must Look Pretty Appealing, visit her website at www.leanor.co.