Jeff Allen at The Union 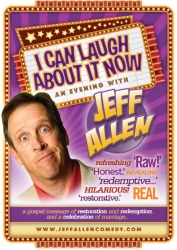 Some of the promotional material for comedian Jeff Allen him as the funniest and most inspiring comedian in the world. Both of those appellations make for one tall order, but it's safe to say he's high in the running for both signifiers.

My recollection was that I quite liked Allen's Happy Wife, Happy Life performance video upon reviewing it for a Christian retail trade magazine some years ago; it came as a pleasant, slight shock to have heard that he was coming near me for a series of three dates to benefit the local Youth For Christ organization. And no ticket charge?! Yup, it was time to see some stand-up.

If part of Allen's schtick is to work up from a slow flow of laughs to a eliciting  more consistent onslaught of guffaws, part of that may be attributable to his self-admitted ordinariness. Though not zanily elastic as the young Jerry Lewis or Red Skelton into senior citizenship, the night's headliner does possess one of those faces suited for the rigors of his trade, especially adept at rubbery, deer-in-headlights mugging. and more tragicomic expression. As he made his vulnerability more apparent throughout his two sets (separated by a donation pitch from organization putting on the event), the latter was more in evidence.

As might be surmised from the title of the aforementioned vid', Allen's is  a largely autobiographical brand of humor, with its greatest focus on family life. In that way, he shares commonality with such current, fairly clean practitioners of his art as Brian Regan. Allen may not share in the latter's kind of superstar acclaim, but there's a certain humility in Allen's tack that likely can only be born of the faith he shares with the ministry that brought him in (for at least a second time;how was I unaware last year?!) and much of his audience tonight.

But there's an edge to his narrative spieling likely missing from most of his comedic kin in Him as well. He 's unafraid to admit that he broke out in laughter when his son got beaned in the noggin his first time at bat in a Little League game. Nor is he sparing in the fact that, in humanity's fallen state, there can come a time when a wife can be so enraged by her other half that hubby can find himself quartered and Hefty-bagged for the next morning's garbage pick-up. That he could jest about how the latter bit, based on a true story, caused a row among some in the crowd at previous engagements proved the comfort in his own skin and that life, as Steve Martin claimed of comedy itself in the title of one of his albums, isn't pretty.

His relationship with his own other half made for some of his most vivid moments. He makes her out to be at least as much of a screwy character as he confessing to being. It was her bitterness and cynicism that attracted him to her, he says, though he made it clear that they got together before his salvation.  In more recent days, she's enough of a trickster as to have surreptitiously drawn a smiley face in marker on his bald spot, noticed by their boy, while she teasingly nuzzling the back of his head. Though they may still have other kinds of fun with each other, Allen admits that the horizontal romantic kind isn't often in their matrimonial vocabulary, saying that it too often takes too much effort. If he's OK with that, it's assumed that his mate is as well with it, too (and that's she's copacetic with his transparency).

More transparent still is Allen's testimony. He doesn't mince words about  how his years of substance abuse led to coming a hairsbreadth away from porce. Then, too, there's  an air of genuine gratitude in his voice when recalling how he was providentially spared from the dissolution of his marriage. He speaks with dumbfounded amazement that he would invited to speak at the Mexican equivalent of a TED Talk, as he described a high-level meeting of minds for a paying audience amid such non-believing luminaries as Deepak Chopra and the editor of Reason Magazine to realize that he was the only Christian presence on the platform. All that stated, he remains self-depreciating enough to call himself a moron for not finishing the last online university course he took.

So, Allen was plenty funny and inspiring.  The funniest and most inspiring of all currently- working comedians? Leaving that up to further debate, he certainly made for a fine evening's worth of entertainment that hopefully have netted the local Youth For Christ a goodly share of its necessary funds.