The City Winery is an interesting, intimate, somewhat upscale New York City venue. So close to the Holland Tunnel that you have to be careful not to slip away to New Jersey, the intimate yet spacious venue features small tables, a lot of polished wood, and large glass windows, behind which huge barrels of what one would assume to be wine are visible. The small tables are set up for four people, so you never know who you'll be getting to know pretty well on a given evening. In our case, it was a friendly couple visiting from Norway who apparently knew nothing about Amy Grant, but were there for a New York City experience. When asked to 'explain' who Amy Grant was I realized that she's actually grown beyond any boundaries set for her by the Christian, country, or even pop music business. I did my best to explain the variety of music the couple could expect – that maybe they would even be familiar with a couple of the hits – and where she came from in her earlier days. Before the show was over our Norwegians were clapping, nodding, smiling, and generally enjoying the show and, yes, even seemed to recognize a few songs.

home, wearing black boots and a short, flowing, earth-toned dress with huge transparent sleeves. Strapping on an acoustic guitar and fronting a band consisting of drums, bass, keyboard, and an acoustic lead-guitar man (who also sang harmonies), Amy led the band through a relaxed but polished almost two-hour set that spanned her whole career.

"Takes a Little Time," "Big Yellow Taxi," "Saved By Love," "Lucky One," "Oh How The Years Go By"... and the years have gone by amazingly fast when you think back to the fifteen year old that was so carefully molded into the image of what every Christian parent wanted their little girl to be or their little boy to end up marrying. A lot of controversial water had gone under the bridge in the intervening decades and Grant has emerged as a bona fide artist – a woman who has come into her own and left the comforts and tribulations of being a pre-packaged CCM icon to deliver meaningful and mature songs reflecting life in all of its complexity. Today the previously mentioned hits are performed alongside such heavy-duty songs as the confessional admonition, "Don't Try So Hard," the bluesy, socially-conscious "Third World Woman," and the wise and thoughtful "Better Than a Hallelujah." 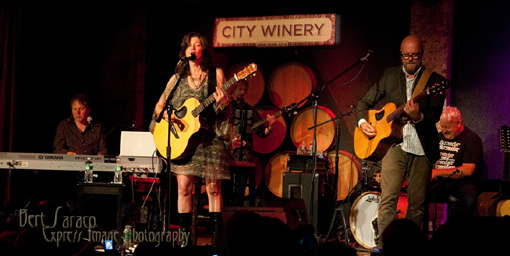 Never a Mariah Carey or Celine Dion, Amy's voice is the voice of Every-woman, but with a smokey, familiar, pleasing tone. She occasionally slips into a falsetto or an upper register phrase with relative ease and has nicely grown into the peculiarities of her own phrasing and vocal inflections so that what used to be something she tried to overcome has turned into an enjoyable and identifiable vocal style. Add to that her confidence accompanying herself on guitar – which she does quite well – and you have a seasoned performer that has earned her way onto a broader stage than most refugees from the 'christian music scene' seldom achieve. 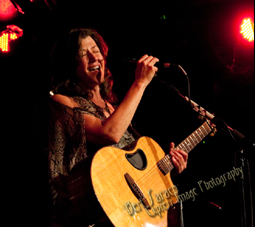 The band was compact, with no electric guitar in sight, giving the show a feeling of intimacy and warmth. Grant's in-between song patter was very off-the-cuff and casual to the point of feeling like you were in her living room instead of a club in New York City. After a full set of hits Amy and her band ended with a fine cover of the Jackie DeShannon hit, "Put A Little Love in Your Heart." As might be expected, requests began to be called out from the audience as the concert wound down. The band responded with "Lead Me On" - the song that, for me, symbolizes Grant's transition from pop star to artist. The real surprise was when the singer bravely went solo, accompanying herself on guitar for "El Shaddai" and a delicate, vulnerable version of "Breath of Heaven." The show that started with "Anywhere With Jesus," ended by recounting the faithful journey of His mother. So that was the second song of the night about a baby – you might be able to guess the first one... 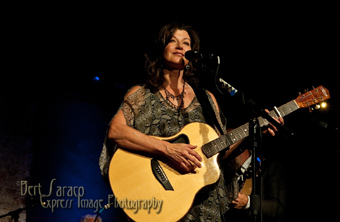