...as the night outside grew darker and colder the night inside became warmer and full of light.

It's two days before Saint Valentine's Day in Manhattan. The East Side of the city is

bustling with people trying to brace themselves against the cold, the winds whipping through the steel canyons of Park Avenue even as the temperatures were preparing to dip into the single digits - a cold snap predicted to make history through the weekend. Hearts were significantly warmer inside the Gothic walls of the almost-century-old Central Presbyterian Church, where storyteller/writer Sally Lloyd-Jones was joined by Amy Grant and Ashley Cleveland for an evening of words, music, and personal stories that made the cathedral feel more like a living room filled with friends.

The largely improvised evening (although it was pointed out that Lloyd-Jones was concerned about 'being prepared' to be 'unprepared') took its form from Nashville's Blue Bird Cafe, which occasionally features writers sharing ideas as well as drinks. Their "Writers at The Bar" didn't translate very well as 'writers in line' (Grant, Lloyd-Jones, and Cleveland are 'lined up' on stage, left-to-right, in that order), and 'writers in the round' didn't seem to say it as well – but singers are story-tellers, too, so 'Story in the Round' was born. Yes, they're pretty-much in a line, but the stories go 'round, and Ashley Cleveland started...

Cleveland's life (detailed in her book, "Little Black Sheep") has been a rough road and her impassioned, bluesy, fearless vocal style, backed up by her raucous folk-rock guitar playing, is the perfect vehicle to tell those stories. Leaning toward blues and traditional 'black' gospel standards, the singer accompanies herself with foot-stomping percussion and immediately captures the attention of any listener – obviously including her two stage-mates. "I leak brokenness," she tells us – and not only do we believe it – we relate to it, and that's the point.

"They have won grammys," said Sally Lloyd- Jones, in reference to the trio's

introduction, "but I have grammies that drink cups of tea and live in England." The writer speaks with a delightful British accent and is the perfect counterpoint to the more visceral delivery of Cleveland and the pop royalty of Grant. The mostly-adult audience was instantly captivated by the poetry and truth of her words – directed at children – about God being the Center of the Universe:
"...Like the dance of the planets before the sun—turning, spinning, circling, wheeling, revolving, orbiting around and around—God made everything in his world and in his universe and in his children's hearts to center around him—in a wonderful Dance of Joy!" (from Thoughts to Make Your Heart Sing). 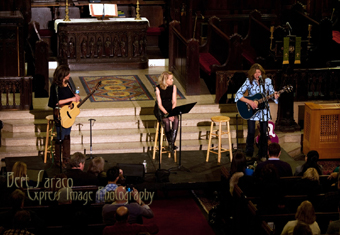 On the left-hand side of the stage was Amy Grant, gazing with admiration at her two partners that night. Guitar slung over her shoulder, sometimes standing, sometimes sitting on a stool, Amy was poised and capable. A better guitarist than most realize, Grant accompanied herself as she sang a variety of the more personal songs from her catalog (but was coaxed to do at least part of "Baby, Baby"), telling stories behind the lyrics. At Cleveland's prompting,

she performed the poignant "After the Fire," written for a niece that had been through some fire of her own. Not a 'planned' performance, it was one of the emotional high-points of the night. That's how it worked...

"Wherever I go, I'm still there." Ashley has a unique way of 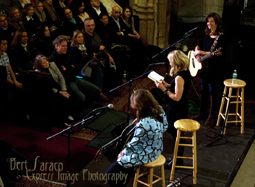 summing things up. "I'm still the same," she says, "but I'm completely changed." The night was about life being hard. It was about family, and love. It was about life being ultimately simple, through the eyes of a child. And as the night outside grew darker and colder the night inside became warmer and full of light. In the end I think the audience of often-jaded New Yorkers discovered a bit more of the child inside.