Leigh Nash at The Highline Ballroom 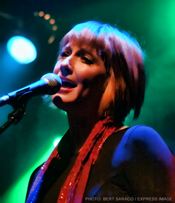 was serving up a treat for connoisseurs of the musical variety. Leigh Nash, best known as the 'pixie-ish' lead singer of Sixpence None the Richer, brought her solo act to the stage, sandwiched between the engaging opening act, singer/songwriter Erick Baker, and the headliner - Edwin McCain ("I'll Be," "I Could Never Ask For More"). The house was clearly McCain's, but an audible 'ahhh' of recognition erupted from the crowd at the first line of "There She Goes" and of course the ubiquitous strains of Sixpence's mega-hit, "Kiss Me."

Dressed in black, with a sparkly scarf and cowboy boots with leopard liners, Nash and her amazing voice were accompanied only by the very capable guitar of her husband, Stephen Wilson. The pristine sound of The Highline Ballroom is a blessing for performers who have nothing to hide, and Nash certainly benefited from this. Never sharp or flat, and surprisingly stronger than her vocal timbre would lead you to believe, Nash was well able to navigate the nine-song set without missing a vocal beat. Covering ballads, pop tunes, one hymn ("Oh, Heart Bereaved and Lonely"), and ending bravely with an a capella version of Leonard Cohen's "Famous Blue Raincoat," the set had enough familiarity for casual fans and enough diversity to impress the uninitiated.

Never a show-boater or a belter, the sometimes-shy Nash peppered her performance with observances and insights about her time with Sixpence None the Richer, parenthood, and life in general (and we might expect a new Sixpence project soon, according to the singer). By her own admission, Nash can tend toward her 'melancholic bent,' but her warmth and openness obviously left this crowd feeling good.

It's not every performer that can get away with light pop, hymns, and singer/songwriter a capella ballads in the same show, but Leigh Nash managed to do it with grace - and the audience was left as satisfied as if they had just raided the Chelsea Market 'round the corner.