How has Faith Helped Dylan to Win the Nobel Prize?

For the first time, the Nobel Prize for Literature has been awarded to a musician. It will not be the first time that Bob Dylan, recently announced as winner, has annoyed the purists.

His reputation was cast in the political and social iconoclasm of the 1960s, a decade full of colour, energy and conflict that was ripe fruit, ready to be picked, processed and served up in songs.

He famously angered the folk purists by plugging in an electric guitar, but both his words and impact have outlasted such temporary spats. And these are surely what have earned him this accolade.

Sara Danius, permanent secretary for the Swedish Academy, announced that Dylan had won the prestigious prize “for having created new poetic expressions within the great American song tradition.”

While that line may be as enigmatic as one of the songwriter’s own, that the man deserves the award is almost self-evident.

While many singers of his generation have long faded into dark obscurity, Dylan – who took his stage name from poet Dylan Thomas – has managed his success on a strangely parallel course.  He has for decades maintained the sort of aloofness that creates legends (as shown in his somewhat rude lack of response to this honour) , but has also recreated himself as open and available, since he began a radio show a few years ago – working as a lowly DJ is not typical legend behaviour.

It is, however, a sign of what drives him. For Dylan, the song is king and he has used song potently for every purpose. His songs have chronicled the rising surge of ‘sixties discontent; they have been apologists for that generation’s new way of thinking; in them, he has bared his heart when his marriage collapsed; and in them he vividly displayed the difference that coming to faith had made in his life.

The BBC quotes Dylan biographer Howard Sounes endorsing Dylan’s accolade as deserved, because “his songs are highly poetic and highly literary - intricate and subtle and clever and funny and profound and sad: everything you can want writing to be.” 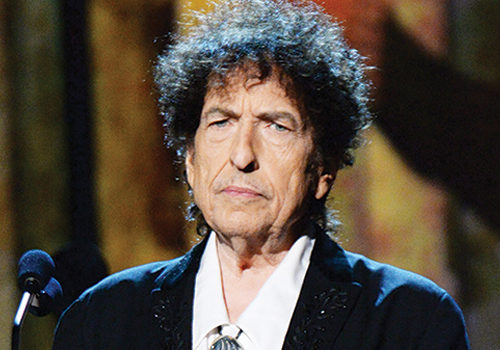 However, many of the poetic qualities that brought him success started to desert him as the strands of his life came together with his Christian coming to faith (as a questioning Jew, belief in the unexpected Messiah brought an extra dimension to his conversion, giving him a new sense of rootedness). Maybe that is a singer’s equivalent of actors believing that the hero is a less interesting character to play than most villains.

The polemic of refrains like, “It may be the devil, or it may be the Lord, but you’re gonna have to serve somebody” rankled with a generation that proclaimed freedom on its own terms.

With the second Christian album Saved, the problem changed. Instead of typical Dylan lyrics being pointed at a fandom that rejected them, this time the lyrical muse took a deep nap while Dylan was rejoicing. Basing the disc on blues and gospel, it was never going to be his most literary release. Simplistic, yes; sophisticated, no.
These words had no poetry, and the images he did use were second-hand jargon, “Saved by the blood of the Lamb. Thank you, Lord, I just want to thank you, Lord!” While the sacrificial reference meant something to him as a Jew, it was hardly ground-breaking imagery that would connect with his traditional audience.

Perhaps we should cut him some slack for a less cerebral output while his heart was taking over his head. Such a joyful life-change deserved an exuberant gospel celebration, and that shone through Saved like a midnight lighthouse.

The more intriguing development was in Shot of Love, the final release of the so-called “Christian trilogy”. In it, he returns to singing about things other than God, preferring to see many more relatable topics through the eyes of faith. People began to ask whether his faith was on the wane, but some of his most beautiful and definitively Christian work was here.

After the challenging and provocative “Dead Man, Dead Man,” which lyrically could have been on Slow Train Coming, and the plainly-titled “Property of Jesus,” Shot of Love ends with its poetic highlight “Every Grain of Sand.” It captures his stage of life, looking forward, knowing that he is loved by God – if feeling alone against the world – and seeing life in a fresh way:

Don't have the inclination to look back on any mistake
Like Cain, I now behold this chain of events that I must break
In the fury of the moment I can see the master's hand
In every leaf that trembles, in every grain of sand

Oh, the flowers of indulgence and the weeds of yesteryear
Like criminals, they have choked the breath of conscience and good cheer
The sun beams down upon the steps of time to light the way
To ease the pain of idleness and the memory of decay

It reads so easily. As much as any of his lyrics, this one proves that he does not always need a tune to make his words work. Given his nasal tone, they can even connect more powerfully in the stillness of the page, unobstructed by his voice. Perhaps that is one reason why he is so often covered – more consummate musicians can take his poetry and make it sound even better.

Moving the story on a couple of decades, 2006’s Modern Love starts with a song that is almost definitively Dylanesque. “Thunder on the Mountain” reads a bit like a surrealist dream, with a current celebrity (in this case Alicia Keys) pasted onto an impressionist text. (It’s the sort of lyric that inspired Larry Norman’s “Nightmare” songs.)

Yet in the middle of that, faith is his touchtone, as he insists:

I don't need any guide, I already know the way
Remember this, I'm your servant both night and day....
Some sweet day I'll stand beside my king
I wouldn't betray your love or any other thing

So has a Christian conversion helped him to earn the Nobel prize?

If that means, “Did his art improve when he became a Christian?” the answer must be a resounding, “No!” He almost lost it on Saved.

But surely no albums have shown him better embracing the sounds of Danius’s “American song tradition” than that album’s gospel celebration and the whole trilogy’s debt to the blues.

And when it comes to the cottage industry (and sometimes degree fodder) of analysing Dylan’s lyrics, that coming to faith brings the novel of his writing to a satisfying resolution, even if it still leaves room for questions about how the story develops. His writing reflects the world’s history, as it traces his inward journey, where the New Testament bursts out of the Old.