Hawthorne Gospel Church in Hawthorne, New Jersey was the venue on 11/10/11 for a concert that was excellent on many levels and provided its share of twists and turns.

Aaron Shust opened with a set of his nicely written and performed worship songs. While Shust is not breaking new ground, his music can quickly lead a congregation into a worship experience and this night was no exception. Even songs by Shust never heard before can be easily learned and his lyrics bring out many Biblical truths. His set included music from various releases and ended with the well known "My Savior My God," a well composed interpretation of an old hymn. 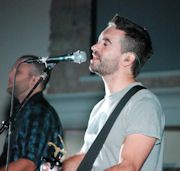 In a way, it may have seemed more appropriate for Jason Gray to open the night, being arguably the least known of the three artists. But in one of the turns (or twists - your choice) of the night, Jason Gray went on second. However, after his set, the more well known Aaron Shust and Jason Gray interacted using a very humorous video apparently recorded earlier that day. This was a wonderfully innovative way to bring on Jason as it gave him a fine and memorable introduction for those not familiar with him. Jason's part of the concert started in a somewhat pop music vein, but he really hit his stride when singing his more personal songs. This is truly moving music that emphasizes our worth in God's eyes, regardless of our circumstances or mistakes. "Nothing Is Wasted" from his most recent release A Way To See In the Dark was particularly poignant. Based on this concert, Jason Gray's music is highly recommended and he is a singer/songwriter to continue to watch.

Then Downhere hit the stage. Definitely not typical "I've heard this before" CCM music. Speaking of twists and turns, Downhere provided their share. And with off the charts vocals (more on this shortly), Downhere basically has two lead vocalists and impressive musicianship. Members play multiple instruments and they used this to great effect. Downhere played predominately selections off their most recent two releases.

Now the last twist, maybe not completely unexpected based on recent internet developments. It seems Marc Martel has the vocal prowess to sing like Freddy Mercury, exactly like Freddy Mercury. Members of the audience may or may not have anticipated what occurred next: a rousing rendition of the Queen favorite "Somebody to Love" that was absolutely "goose bump" producing and brought the auditorium to its feet. A reading of the lyrics of "Somebody To Love" actually reveals someone crying out to the Lord and was a very appropriate ending to the Downhere set.

The concert ended with all the performers and audience singing "Mighty to Save". It was a wonderful and worshipful way to end the evening.

Worth mentioning is that the Called To Love tour was sponsored by World Vision. A presentation meant to provide audience members with the opportunity to sponsor children was made. It's encouraging to see these musicians give of their time to such a worthy cause.

You can see Marc Martel's audition recording of "Somebody to Love", his appearance on The Ellen Show, and a remarkable rendition of "Bohemian Rhapsody" performed at a church in Summit, New Jersey on YouTube.

The most recent releases by all three performers have been reviewed in the Phantom Tollbooth.