Tom Wright - Pulled between the People and the Page

Wright talks about Rob Bell, heaven & hell, and the tensions between academic and pastoral life.

Those of us who struggled towards the end of our schooldays, wondering with ever-increasing panic what we would do for a career, might consider Tom Wright one of the lucky ones. He seems born to the role he has taken on – or should that be roles? For Wright is known for different things in different places.

In his native England, he has been known as a clergyman, eventually becoming a bishop, before he resigned his place at Durham, allowing the then little-known Justin Welby to succeed him. To a wider audience, he is known as a writer, particularly through his ‘For Everyone’ series of commentaries that make the New Testament more accessible to the person-in-the-pew.

Going into the ministry was always going to be an option for Wright (“there were more clergy in my family than you could shake a stick at”) but his career not been straightforward, a pull constantly drawing him towards academia (“the trajectory always was, from late teens and early twenties, a mixture of the academic and the pastoral and that’s always been a problem”).

Many of us might find it hard to see why that should be such an issue, as both are roles expected of church leaders, but at theological college, he was asked to choose between being a parish priest or a scholar. He still remembers the moment when he refused to be pushed to one side or the other, deciding that the two were too interdependent to be separated.

As he grew up, he recalls, “I just assumed that I would be a parish priest. I knew quite a lot about how parish life worked and that looked pretty good to me. Even then, though, I wanted to be a Bible teacher. I used to go to scripture boys’ camps and I used to love the sheer biblical teaching that we got; and when given half a chance to lead Bible studies, I used to love doing it.

“So for me, it’s never been an either/or; they flow into one another (and, actually, the Church of England has a great tradition, which is hard to maintain with the pressures on both sides, of people being both).

“I’ve often said to people, ‘Would you rather hear a lecture on Johann Sebastian Bach by somebody who says, “I’m tone deaf; I don’t listen to music and I don’t play it, but I just study it as a technical subject” or would you rather listen to a lecture on Bach by somebody who was about to go off and play all the 48 Preludes and Fugues or something?’ I think I’d rather have the latter. Even if his interpretation was rather quirky, he would be actually engaged with the stuff.

"In the same way, the New Testament is not written as a window on the philosophical and sociological climate of the first century.  It’s actually written as a musical score to be played and you’ll only really understand it when you take the text seriously as stuff which somebody ought to be going out and playing."

Wright has managed to combine elements of academia and pastoring throughout his career: when a college chaplain, he was caring for students in an academic environment; when his work was primarily church-related, he was still able to teach graduates; and from 2000, as Canon Theologian, he had time to broadcast, write and teach within the liturgical life of Westminster Abbey. 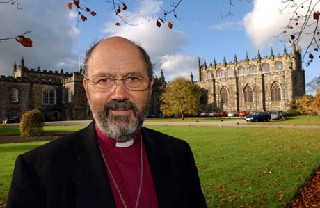 Then he became Bishop of Durham, where, he explains, “the Church of England has traditionally sent theologians. The people of Durham know that their bishop may well be somebody who ends up writing books.  I’ve tried to stick with that. It was only really two years ago, when it became clear that if I carried on much longer at Durham I simply wouldn’t be able to finish the major projects which I had started, that my wife and I gave in and said, ‘OK, let’s go back into the academy!”

There is a slightly resigned tone to his voice as he says that, and I had already wondered whether he regretted the decision to resign. Referring to Eric Liddell’s comments in Chariots of Fire, “I’ve plenty of regrets, but no doubts,” Wright admits that he has “huge regrets” and misses his people very much, even though he still believes that leaving Durham was the right decision.

Resigning in favour of writing means that he is arguably reaching more people and over the last few years, his theological work has been making waves across the Church, provoking people to think afresh about how they read the Bible. His latest two books work together in presenting a cohesive look at what it means to live as a Christian, both in the big picture of Earth, heaven and hell (with all the implications implicit in re-reading those areas) and more recently in presenting a fuller picture of Christ’s mission and incarnation.

I suspect that his Surprised by Hope was responsible for a resurgence of interest in heaven and hell, because of authors like Rob Bell, Francis Chan and Paula Gooder making a follow-on impact with their books, but he insists that it is too big a question.

“Paula Gooder and Rob Bell are exceedingly different characters, both of whom I know. In fact, I taught Paula at Oxford – she’s one of my star pupils.

“I read Rob Bell’s book and was very puzzled about it, because actually all his arguments, which are pointing in the direction of universalism without quite going there, are arguments that I met in studying theology in Oxford in the late ‘sixties and early ‘seventies. It’s puzzling to me why they would come up now. I think Rob comes out of this very American context, where ‘believing in heaven and hell’ is almost synonymous with being a Christian and that this is a medieval perception that being a Christian gives you this picture that you get in the Sistine Chapel of Christ in the middle, sending some people this way and some people that way.

“That is not how the Eastern Orthodox churches see it; it’s not how the New Testament routinely presents it. The image of the sheep and the goats in Matthew 25 is there and it’s important, but it’s by no means the only image. If you look at Romans 8, 1 Corinthians 15 or Revelation 21-22, you get some very different imagery and when we’re talking about the ultimate future, we’re talking about signposts which have symbols on them.

“When you are driving down the roads and see a sign to a castle you may have a picture of a castle. The castle’s not going to look like that. We know that’s a symbol and we know how to decode it. In the same way, we need to be a bit more grown up in how we read the Bible and decode the sheep and the goats, and decode the New Jerusalem coming down from heaven; and decode these things to say this is actually about God’s old-new creation.

"God will not have – and cannot have – in the new creation, anything as Revelation says, that loves and makes a lie, anything that corrupts and destroys God’s world. So, almost a definition of hell is that this is what happens when people determinedly say to God, ‘OK, I see you’re trying to do a new creation. I actually prefer to go with the old one, which means I’m going to corrupt myself and everyone else.’ Few people actually say that, but that’s what their behaviour is saying.

“Rob doesn’t try to be academic. Rob has ministered for a long time in a situation where many, many Americans have as almost the number one article of their faith, ‘There’s a lot of people out there going to hell, including him and her and him and her and so we’re going to save them.’ That’s a pretty unbiblical way to look at the world. Rob has wanted to jolt people out of that wrongly judgmental way of approaching everything.

“I don’t think Rob has solved how you do it differently and coherently, but I think he has raised a red flag against that gross distortion.”

Wright has noticed a change over the centuries in how gravestone inscriptions reveal people’s expectations of death. They used to say things like “I will arise,” whereas after the mid-18th century, they changed to comments like, “Home at last with the Lord.”

“In other words," he explains, "up until the 18th-19th century, they’re thinking of a two-stage post-mortem reality and then at some point, they backed off from that and it’s just dying and going to heaven and that’s it. That then leaves the whole vision of new creation open for other people to exploit – including the secularists, by the way: ‘You Christians are just pie-in-the-sky; we’re going to transform the world’ and that’s why Marxism is a Christian heresy.”

So Wright has tried to restore what he sees as a more biblical view of the end times than, for example, the Left Behind series portrays. He preaches Paradise as a holding place after death (for example, when Jesus told the dying thief, “Today you will be with me in Paradise,” that was plainly not a permanent situation) and tags God’s ultimate recreation of heaven and Earth as “life after life after death.”

That is the future, and he believes that a better understanding of Christ’s past will help the Church to make a better and more godly impact in the present. How God Became King attacks the western understanding of the gospels as simply books that tell us how Jesus died for us, so that we can go to heaven.

He argues that the gospels are all about how Jesus became king on Earth as in heaven, but theocracy is a scary subject for many. Does he feel that the dramas over Sharia law have made people worry more about the concept?

The answer is a swift, “No.” He blames enlightenment rationalism, an epicurean attitude that says, “We’ll push God upstairs, so that religion is what people do with their solitude here and hereafter; and we’ll organise the world in a more sensible way down here.’ It’s that everyday work in the world that he wants Christians to wake up to, a task that can be inspired by re-reading the gospels.

He believes that too many Christians have taken the creeds as key in Jesus’ life at the expense of what Jesus actually did on a day-to-day basis, as if it did not matter how he lived as long as he was born of a virgin and died on the cross.

One of the more exciting things about Wright is the way that he is challenging Christians to accept huge changes in the way we understand basic Christian teaching, but does so from a highly scriptural basis. He is a rare thing, I tell him: someone who is popular amongst various Christian groups at once, both conservative and liberal… “and unpopular amongst various groups at once” he adds, chuckling.

As someone who has been pulled between pastoral and academic life for decades, it makes sense that he does not write for the sake of it. “Most of the stuff I write, I write because I really, really, really care, and am excited and passionate about it. But I’ve been excited for years about the big book I’m writing on Paul at the moment. It’s changed a lot in that time, but I’m still very, very excited about it and looking forward to getting it done and out there.”