If you asked around for people’s favourite French films, at least one of Jean de Florette and Manon des Sources would probably be in most people’s top five. La Gloire de Mon Père and Le Château de Ma Mère would not be far behind. All of them come from the mind of Marcel Pagnol.

While Jean de Florette and Manon des Sources were stories set in his beloved Provence, these other two are his own memories of childhood. They took place at the turn into the twentieth century, a time when his schoolteacher father was optimistic about the benefits that new technology, such as the telephone, were about to offer the world. With his father’s promotion and the family’s new ability to take holidays in Provence, the tone is unrelentingly optimistic.

As Marcel (Julien Ciamaca) is the oldest son of his father Joseph (Philippe Caubère) and mother Augustine (Nathalie Roussel), we follow the growth of his family: the birth of his siblings, the romance and marriage of his aunt Rose (Thérèse Liotard) to the wealthy Jules (Didier Pain) and the growth of their own family.

Yves Robert’s treatment of Pagnol’s life is suitably romanticized, in keeping with the author’s own work. The films have little story in terms of hard plot, but they ooze atmosphere and draw the viewer into a world of new discoveries, all seen through a child’s eyes. When his aunt is about to give birth, he explains to his brother how you add up the ages of the parents and that is the age that the child is born, so the baby will be wrinkled and in its sixties.

The two films were made together and cover the family holidays in the hills, where Marcel meets Lili (Joris Molinas), a friend who introduces him to the pleasures of rural life and hunting birds. When the summer holidays are over, Marcel is distraught and cannot wait to visit the cottage again. Le Château de Ma Mère sees the family take weekends in the country and this time, Marcel comes across the beautiful, but manipulative, Isabelle, who casts her spell over him and draws him away from time with Lili. Most of the film follows the family’s weekly trespass along the canal in order to shorten the four-hour journey to their cottage.

The two 30-minute extras give great background to the  films. Pagnol’s Glory, the feature that comes with La Gloire de Mon Père, paints a picture of Pagnol, using the memories of his grandson Nicolas and the knowledge of novelist Karin Hann, who – commenting on the success of his films, novels, plays and history writing – claims that “there has been no such example in the history of (French) literature. He never failed.” 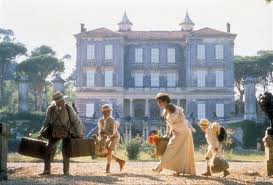 His grandson tells how he was the first Frenchman to shoot on location, and the first to support actors who moved from theatre to the talkies. He claims that Truffaut and Godard admired his pioneering work and that Antonioni even called him the “father of Italian neo-realism,” which is a huge claim.

While the other feature is named Filming Aunt Rose, it uses interviews with Director of Photography Robert Alazralki, as well as Thérèse Liotard, to recount the memories of working with Yves Robert on the making of these films. It helps that the two had wildly different experiences with the man.

These stories are enormously popular in France, the first novel selling 50,000 copies in its first month and the movies making over $3 million. These films are utterly charming and filled with human experience. The friendly battles between Marcel’s atheist father and Christian uncle show how respect for people should trump idealogical disagreements, while Marcel’s exhilaration at being among the hills is infectious.

The two belong together and the new features complete the package.